Why Texas Could Be the Right Place to Move Your Business

Darci Watkins
January 20, 2021 at 12:16 PM
Texas is the second most populous state in the U.S. and the largest in terms of size. Also, the Lone Star state has seen a recent upsurge in many businesses, large and small moving their headquarters there. So why this sudden interest in moving businesses to a state that for many people remains associated with cowboys, ranches and Longhorns?

The reason is simple- a lot of businesses are coming to the conclusion that Texas makes a good home for both startups and for larger, well-established companies too. Many companies shortlist their prime reasons for relocating their business to labor and workforce issues, the wish to access new markets, the need to upgrade facilities or equipment, or to lower costs and increase cash flow. And Texas, apparently, seems to offer a lot of this.

If you look at the numbers, it’s easy to see that Texas ranks among the most booming state economies nationwide. WalletHub places Texas as the 12th best economy state-wise based on factors like startup activity, high-tech industry jobs, GDP growth, and more. The Federal Reserve bank of Dallas reports Texas to produce 9% of the nation’s GDP, ranking right behind California. And the Dallas Morning News reports Texas economy to have added almost a thousand jobs daily in 2019. The state’s diverse workforce includes 13 million people and is growing every day.

Here are some reasons to join the multitude of businesses relocating to Texas.

Texas boasts a much lower cost of living than many other states. Zillow reports the average home price in Texas to be around $190,000 and the average rent price to be about $1500.

Fueling the massive California-to-Texas migration is part of this equation. The cost of doing business and living in Texas is a fraction of that of California. With the sky rocketing cost of living in San Francisco, Texas is becoming an attractive location for both young and experienced tech professionals

Texas is also one of the few US states that boasts no income tax. Being one of the most tax-favorable states in the U.S. Texas does not impose taxes on the personal income of its residents.

Quality of life is another concern where companies may evaluate relocation after looking at education and recreational facilities, health facilities, crime rates and other factors. This often counts for a main reason why inner-city locations are losing business as companies prefer to move elsewhere for an improved quality of life.

Texas offers all this and a range of other experiences at museums, restaurants, music venues and more across the state.

Another factor pulling companies to Texas is location. Falling in the Central Time Zone makes it easier to manage employees coast to coast. You can get nonstop flights to all US cities and travel to as far as major European cities and the Far East.

Texas also happens to attract a fairly diverse population in terms of racial, ethnic, linguistic, cultural and economic diversity. Major Texas cities like San Antonio, Austin and Houston all boast vibrant and unique cultures ranking Texas as the second most diverse state in the nation, according to a study by WalletHub.

City-wise, Houston now surpasses New York City and Los Angeles as the country’s most diverse metro area. This is a major consideration among cities trying to lure jobs and workers to fill them in the community. Using data from the Kinder Institute and Rice University, thecitywithnolimits.com reports Houston to enjoy a racial diversity compromising of 37% Anglo, 37% Hispanic, 17% black and 8% Asian.

Business-wise, the variety of cultures, languages, and opportunities cater well to the economics of the region as different people with different backgrounds gravitate towards different jobs. A blend of immigrant and native-born populations have made major Texas cities economic powerhouses accounting for the nation’s high GDP. The same also echoes the state’s cultural and economic diversity being instrumental in nurturing regional business growth.

So, while these may seem like promising reasons to consider relocating your business to Texas, relocating can be risky. As many things could go wrong with the move as right. Some common pitfalls include rushing the decision, focusing too narrowly on a few costs and missing environmental or regulatory concerns. Trying to do a move cheaply can also make relocating more difficult than it really has to be.

To address these and any other concerns regarding relocating your team to Texas, get in touch with us at Corporate Relocation International in Dallas. At CRI we can devise a comprehensive group moving plan from start to finish for your company. Our services include policy design, relocation cost analysis, expense management, area tours, household goods shipments and more. 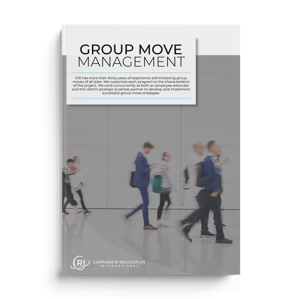 Should You Move Your Business to Texas During the Pandemic?

Why Relocate Your Tech Company to Austin?

How companies can support work/life balance during COVID-19